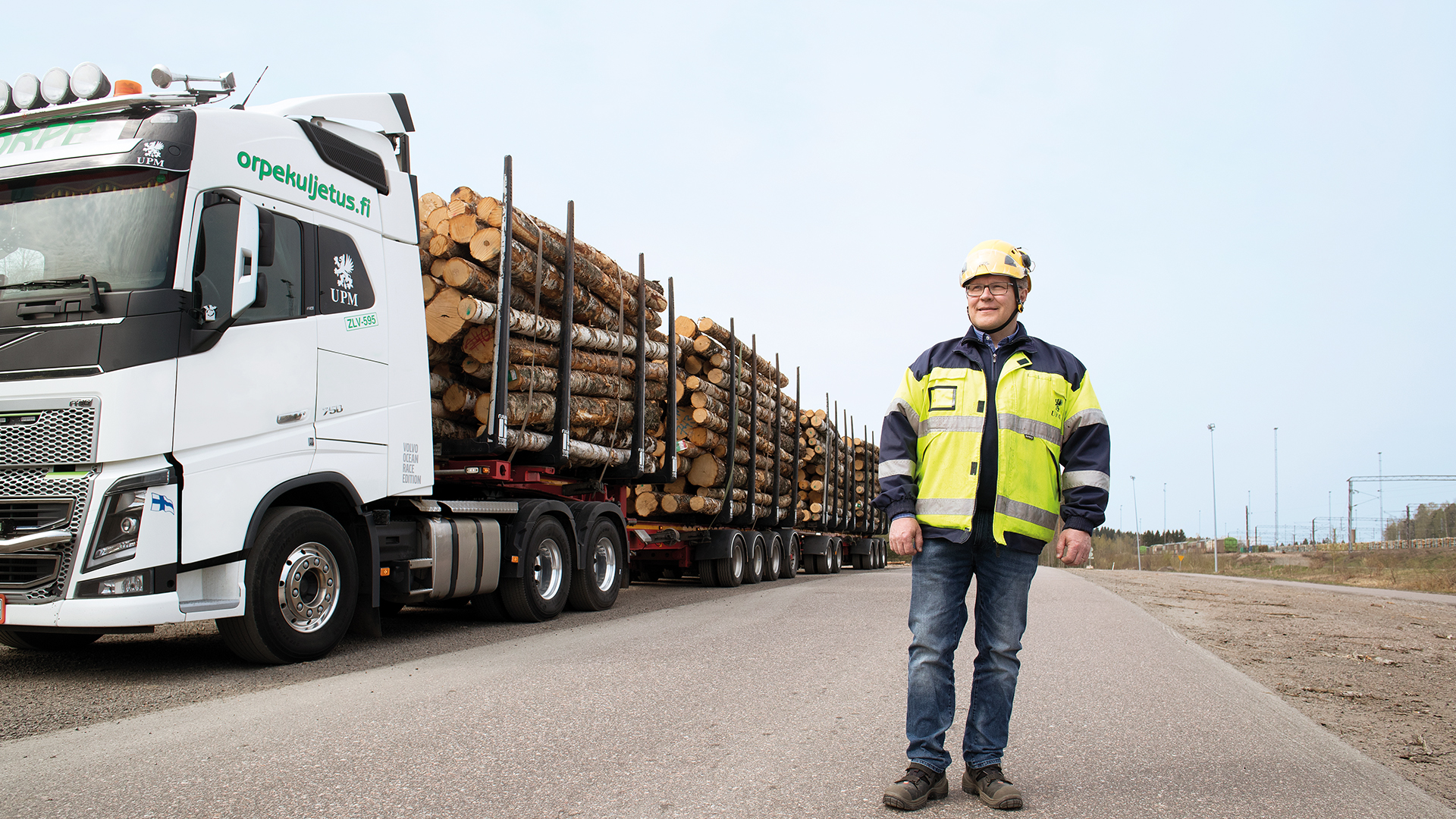 UPM Forest achieves two goals in one with its logistical choices: lower emissions and improved transport efficiency are two sides of the same coin.

Logistics plays a significant role in the forest industry’s production chain. First the wood raw material is transported from the forest to the mill. Then, after processing, it is shipped to the customer as pulp, paper, plywood, or sawn timber.

UPM Forest reduces its carbon footprint and emissions by choosing the most appropriate vehicles, routes and warehouses for its transport needs. As a further positive offshoot, this also improves transport efficiency.

“The logistical choices we make in transporting raw materials and products are important not only for commercial reasons but also in terms of environmental responsibility. Transport must always be safe, environmentally sound and profitable,” says Esa Korhonen, Senior Manager, Logistics Services at UPM Forest.

Harvesting, storage and transport to the mills are carried out using a flexible combination of railways, vehicles and water transport. UPM’s mills use more than 20 million cubic metres, which amounts to more than one thousand truckloads, of pulpwood and log wood as raw material every day. Two thirds of the pulpwood and log wood is transported by road vehicles, a quarter by train, and approximately 5% by water.

In recent years, UPM Forest has actively piloted High Capacity Transport (HCT) as part of a large project involving various research institutes and transport entrepreneurs. Since 2013, giant trucks longer than 25.25 metres and carrying over 76 tonnes have been tested as part of a new project headed by Traficom (Finnish Transport and Communications Agency).

The results of the trial have been promising.

“HCT combination vehicles allow us to reduce fuel consumption per load and improve safety by reducing the number of trucks on the road. Thanks to the location of the mills, our unique transport system and great planning, we have been able to increase the proportion of giant trucks that carry a full load,” says Korhonen with a smile.

According to Metsäteho Oy, R&D specialists also involved in the project, the benefits of giant trucks are especially clear in chip transports between terminals. Depending on the size of the combination vehicle, the costs are reduced by 5–15% compared to regular trucks. An 84-tonne vehicle can retrieve the load directly from the forest, leading to a cost saving of almost 10% compared to regular combinations.

The benefits of HCT include lower emissions and up to a fifth lower fuel consumption.

“Emission benefits are gained even on trips shorter than 100 kilometres. With a heavier total weight, the portion of payload increases and fuel consumption per transported cubic metre is reduced. The benefits are increased if the HCT combination vehicles carry a full load both there and back,” says Pirjo Venäläinen, Senior Research Scientist at Metsäteho.

UPM Forest is the only company in Finland that uses floating as a method of transportation alongside railway and vehicle transports. Water routes are efficient, as they are ready for use without requiring additional investment.

“We stand out in a good way. Floating is not only a transport method, but it also doubles as a storage method. Free storage makes it environmentally sound and commercially profitable,” Korhonen says.

He calculates that floating uses only a third of the energy used in vehicle transports and half of that used in railway and ship transports. One floating raft is so big that transporting a corresponding amount of wood by road would take hundreds of truckloads.

Even though UPM Forest uses the floating method less often than other wood transport options, its active use promotes the company’s competitiveness in logistics. Different transport methods do not compete but offer options for finding the safest, most profitable and least environmentally harmful solution for varying transport needs.

“Little streams make big rivers. Responsible management and rules are necessary, but the right attitude is the most important thing. With the right mindset, we can only succeed,” Korhonen believes.