WISA Plywood – a durable brand: 50 years of plywood vehicle flooring in the UK

UPM Plywood celebrates 50 years of plywood vehicle flooring in the UK with a stroll down memory lane from the 1970s up until today.

In 1972, the first sales office for Finnish plywood was established in Great Britain. Since then, WISA plywood has grown to its current position as a leader in vehicle flooring. Although the development in coating technologies and production methods has been tremendous, the WISA brand has stayed strong and consistent for half a century.

UPM Plywood’s Juha Patovirta, Senior Manager, Business Development, and Andrew Jackson, Sales Manager for UK & South Africa, have both been in the business for decades. In this series, they look back at plywood vehicle flooring products, market developments, anecdotes and facts for each decade from the 1970s up until today.

As Andrew Jackson puts it, “because of the competition, we might not necessarily dominate the market in the UK today, but we created the market!”

The 1970s: A plywood revolution in vehicle flooring

The plywood industry in Finland has always been based on export, notes Juha Patovirta. One of the first end-uses of plywood was tea boxes used to transport tea from India and Sumatra to the UK more than 100 years ago.

We’ve come a long way since, so let’s fast-forward to the first half of the 1970s: The vehicle industry is rapidly developing with materials such as aluminium, steel and GRP (Glass Reinforced Plastic) composites gaining popularity.

Finnish forest company Schauman sets up a subsidiary in Great Britain in 1972, and shortly after, Schauman introduces the revolutionising product Wisadeck to the British market: Phenolic resin coated plywood panels with a slip-resistant surface, specially designed for vehicle flooring.

The first customer to use WISA-Deck was the manufacturer of the original Tautliner, Boalloy. Founder Gerald Broadbent saw the floor in an exhibition in Austria and thought it was an ideal solution for what he was looking for.

Leafing through a brochure from 1973, Juha Patovirta notes that “at this point in history it was very much about teaching customers to use plywood; how to fix it, how to saw it, and so on.”

The effort bore fruit, and plywood caught on as a popular material for vehicle flooring – first in shipping containers, but also in trucks and trailers. “Wisadeck is still a generic name used in the industry after 50 years,” Andrew Jackson points out.

“Schauman was a frontrunner in the 1970s, and it laid the foundation for what type of business we are today,” Jackson says. “We stand for quality and have a reputation for being innovative and meeting certain standards, and we can sustain the same standards for a long time, not deviating from your foundation.”

Welcome to the 1980s! Wham!, Band Aid and Frankie Goes to Hollywood are playing on the car radio, and plywood has started to replace hardwood planks in trailers – first in the UK and then in Germany.

As the general living standard rises, the need for transportation of food and other goods grows. The increased cost of aluminium, steel and hardwood makes plywood an even more attractive material for truck and trailer flooring, saving mileages with its lightness.

WISA-Form and WISA-Hexa are added to Schauman’s product range, and large maxi panels, which were introduced already in the late 1970s, are now gaining a foothold.

“Schauman also manufactured GRP composite panels, and in the early 1980s, they were probably one of the biggest sellers we had in the UK,” Andrew Jackson says, adding that during this decade, Schauman is heavily into making GRP sidewall panels.

However, when the EU in the mid-80s extends the permitted trailer length, the investment needed in the Savonlinna plywood mill to go from 12.2 metres to 13.6 metres was not justified anymore, and Schauman decided to withdraw completely from the GRP market in Finland. Instead, a company was set up in the UK to make GRP composites. It started operating in 1990. 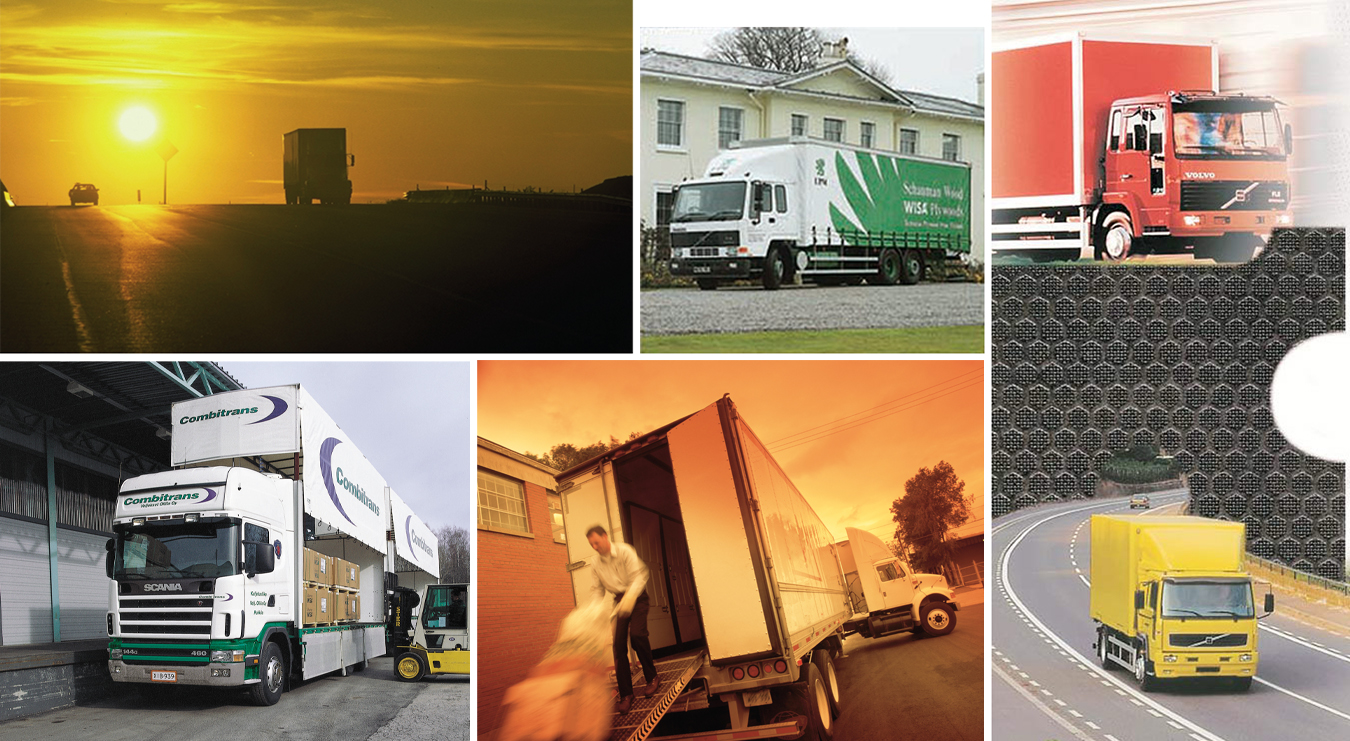 From the 1980s onwards, the Finnish forest industry saw a lot of mergers and acquisitions. In the late 1980s, Schauman had also been through mergers, and in 1996, UPM-Kymmene is formed.

As the general pace of life speeds up, the durability requirement for vehicles increases. In the 1990s, trailer floors must withstand even more loading and unloading, which are now increasingly done by forklift. This development means that the coating of plywood for vehicle flooring must be more durable than ever.

“In the 1990s, we were constantly looking at new developments and concepts,” remembers Andrew Jackson. He joined the company in 1990 but has worked in the industry since 1984.

Up until this time, the theory had been that the harder the coating, the better, which at times had caused problems with shear failures. Now, R&D understands that the hardest coating is not necessarily the most durable.

These exceptionally durable floors are revolutionary in design, concepts, and coatings. They open new opportunities, and UPM Plywood understands that the expertise that the company has from shipping containers can be utilised in trailers used on the road.

“So, from the late 1990s to today, we built a wider client base, based on plywood competing mainly against hardwood planks and other hardwood materials from the far east,” Jackson says.

Andrew Jackson sums up that where Wisadeck dominated the 1970s, WISA-Hexa was the hit of the 1980s, and WISA-Trans was the star of the 1990s.

“In the UK, we were strong in smaller vehicles, but not dominant in big trailers. The launch of WISA-Trans in the 1990s opened a new door for us in specifications for bigger trailers, and WISA-Trans is now a recognised brand for trailers. It has kind of taken over the generic name of Wisadeck to a certain extent,” he notes.

The 2000s: Efficiency and globalisation change the rules

Juho Patovirta joins UPM Plywood at the beginning of the 2000s and steps into a business busy with internal optimisation.

“The global competition meant that we had to concentrate on internal efficiency and cooperation between companies. The discussions were mainly about cost cuts and how to get more with the same,” he says.

The product portfolio only sees minor changes, but panels are no longer manufactured in standard sizes. Instead, they are tailored to fit the vehicles, they are made for.

Specialisation is high up on the agenda during the 2000s: UPM Plywood continues expanding into the trailer flooring market, while the container market is declining, and the company withdraws from the GRP composite market, as it is not sustainable anymore.

The 2010s: Safety, responsibility, and transparency

The global financial crisis casts its shadow over the second decade of the new millennium.

“A lot of rationalisations took place after the crash, and we used the rest of that decade rebuilding and rebranding so that we could retain our dominant position in the market,” Andrew Jackson says.

Safety becomes increasingly important within loading and transportation, and the high-friction trailer flooring WISA-TopGrip is launched. Responsibility is another hot topic, and UPM Plywood takes on a leading role in this development with its “responsibility made easy” pledge.

“Transparency is an important part of being responsible,” says Juha Patovirta. The increased transparency level shows for example in the way UPM Plywood exchanges info with key customers to optimise capacity and guarantee availability, using a forecasting system that estimates the capacity according to the customers’ needs.

“We have agreed on minimum buffer levels of stocks. They used to be at our mills in Finland, but nowadays our stocks are located closer to our customers. The reaction time is much shorter,” he explains.

The work done during the 2010s is all about getting ready for the future, notes Jackson. “The foundation for continuing as a market leader in vehicle flooring is set, and the company is ready for the next generation to take wherever it goes,” he says and adds, “I’ve always found that we are just custodians, in the sense of it that we are just here for a short period in a company that has been around for over a hundred years. What’s important is how you respond and take care of that for the next generation.”

The 2020s and beyond: How will the story continue?

The optimal weight-strength ratio of plywood has through half a century been one of the keys to Schauman’s, and later UPM Plywood’s, success in vehicle flooring. And the weight-strength-ratio is as essential as ever, Juha Patovirta says.

“It will become more and more important due to the green revolution!”

Transportation of deadweight is increasingly expensive, and while the remarkable development in engine technology has made engines much cleaner, they have also become heavier. To maximise the payload, the extra weight of the engine has to be compensated – for example by using plywood for flooring.

As history shows, WISA plywood has proven its worth as a durable solution for vehicle flooring. To the customer, the brand has remained almost unchanged, but the technical performance and manufacturing methods have changed substantially since Wisadeck was introduced in the 1970s.

Coatings have developed tremendously since the first liquid phenols were sprayed onto the panels. Also, the mills that used to be heavily labour intensive have been modernised and automated during the latest few decades.

One thing that has never – and will never – change, is the raw material used for plywood vehicle flooring: wood. With forests being a natural, renewable resource, the answer to the question “how far can you take plywood,” is, according to Andrew Jackson, “how big is your imagination”.

“That’s how big our market is,” he concludes.