Do you know the difference between biogenic and fossil carbon dioxide? In this article, we look at the causes of climate change and why renewable materials like WISA plywood are part of the solution.

The debate on climate change is teeming with different concepts and definitions – there is carbon neutrality, climate positivity, carbon capture and storage, and so forth. Varying terms can sometimes be difficult to distinguish or compare. However, understanding the root causes of climate change is paramount to mitigating global warming and avoiding severe consequences of potential climate breakdown.

When discussing climate change, it is worth recalling the Earth's natural greenhouse effect and the carbon cycle. Moreover, when assessing the environmental impact of wood products such as WISA plywood, it is important to consider the difference between biogenic and fossil carbon dioxide.

Carbon is also stored underground on Earth. Over millions of years, fossil fuels have developed in the layers created by the decomposition of animals and plants. Burning oil, coal and natural gas releases fossil carbon dioxide into the atmosphere, which increases the amount of carbon dioxide in the atmosphere. This intensifies the natural greenhouse effect, which has already led to a greater than expected rise in global average temperatures. The use of fossil fuels is responsible for around 90% of global carbon dioxide emissions.

Phasing out fossil fuels is therefore key to mitigating climate change and its consequences such as droughts and extreme weather events. 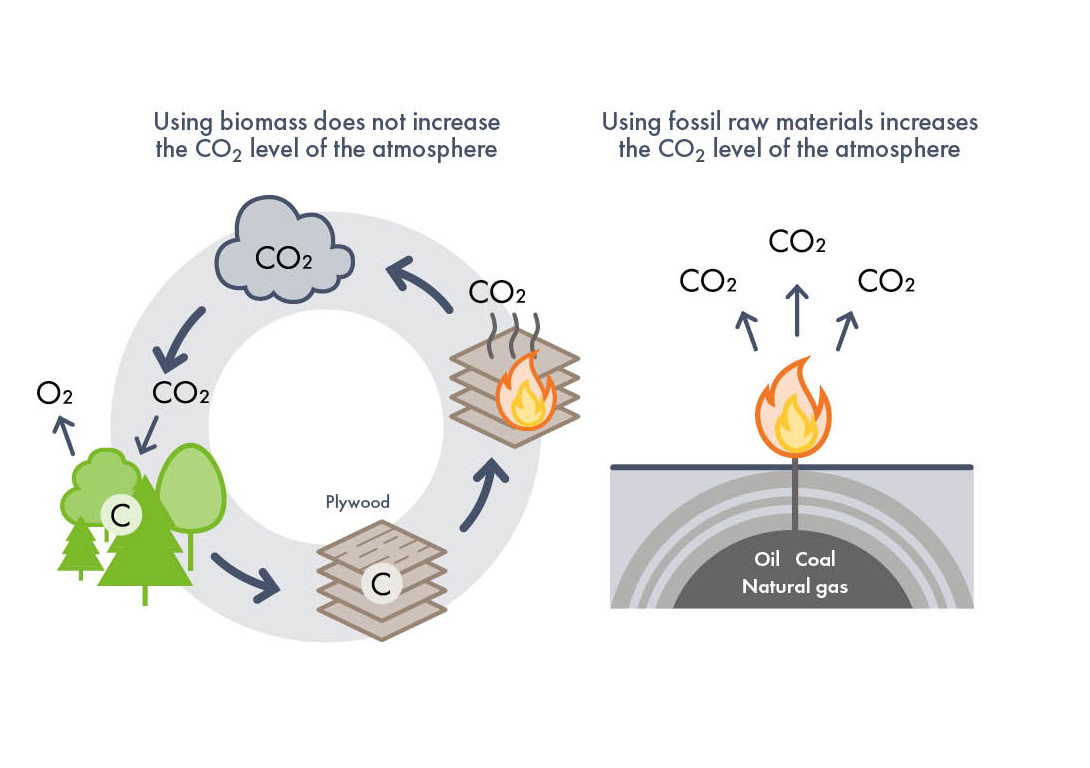 Bioeconomy as a solution to climate change

The use of renewable resources such as forests offers a sustainable alternative to an economy based on fossil fuels. UPM's WISA plywood is an example of a product made from renewable raw material that serves as a long-term carbon store and can replace materials made from fossil raw materials in various applications.

WISA plywood is made from wood from responsibly managed forests. Responsible forest management mitigates climate change by ensuring that forests grow faster than they are harvested. While taking care of the forests' well-being, they grow quicker and absorb more carbon dioxide from the atmosphere.

As a pioneer in the bioeconomy, UPM has set a target of climate neutrality, i.e., net zero emissions by 2040. This means that the company's operations will not increase the amount of greenhouse gases in the atmosphere. UPM will implement its commitment throughout its value chain, from forests to production and products. In this series of articles, we will see how climate change is being mitigated at different stages of the value chain.

This article is part of our new Plywood Beyond Fossils series. The series will showcase concrete measures UPM Plywood is taking to help mitigate climate change. Read more on our Responsibility Made Easy website.