In our second report on the revolutionary Future South Africa Innovation Campus in Pretoria, we look at a remarkable building project from the viewpoint of WISA-Birch distributors Universal Plywood.

The ambitious brief from the University of Pretoria was to ensure the design not only created the right buildings but found ways to foster critical thinking and research. Today anyone entering the campus discovers how plywood is so much more than a building material - it creates a very special environment.

With headquarters in Johannesburg, engineered wood specialists Universal Plywood are the biggest distributor of WISA plywood from UPM in sub-Saharan Africa.

Working with André Eksteen from Earthworld Architects in South Africa, Universal Plywood MD Brad Anderson swiftly realised that constructing the campus residential units, conference centre, dining hall and research building would be totally different. As Anderson says: "We work with the construction, transport and furniture sectors supplying 15 UPM plywood products. This was truly revolutionary because we went full circle - back to building with wood." 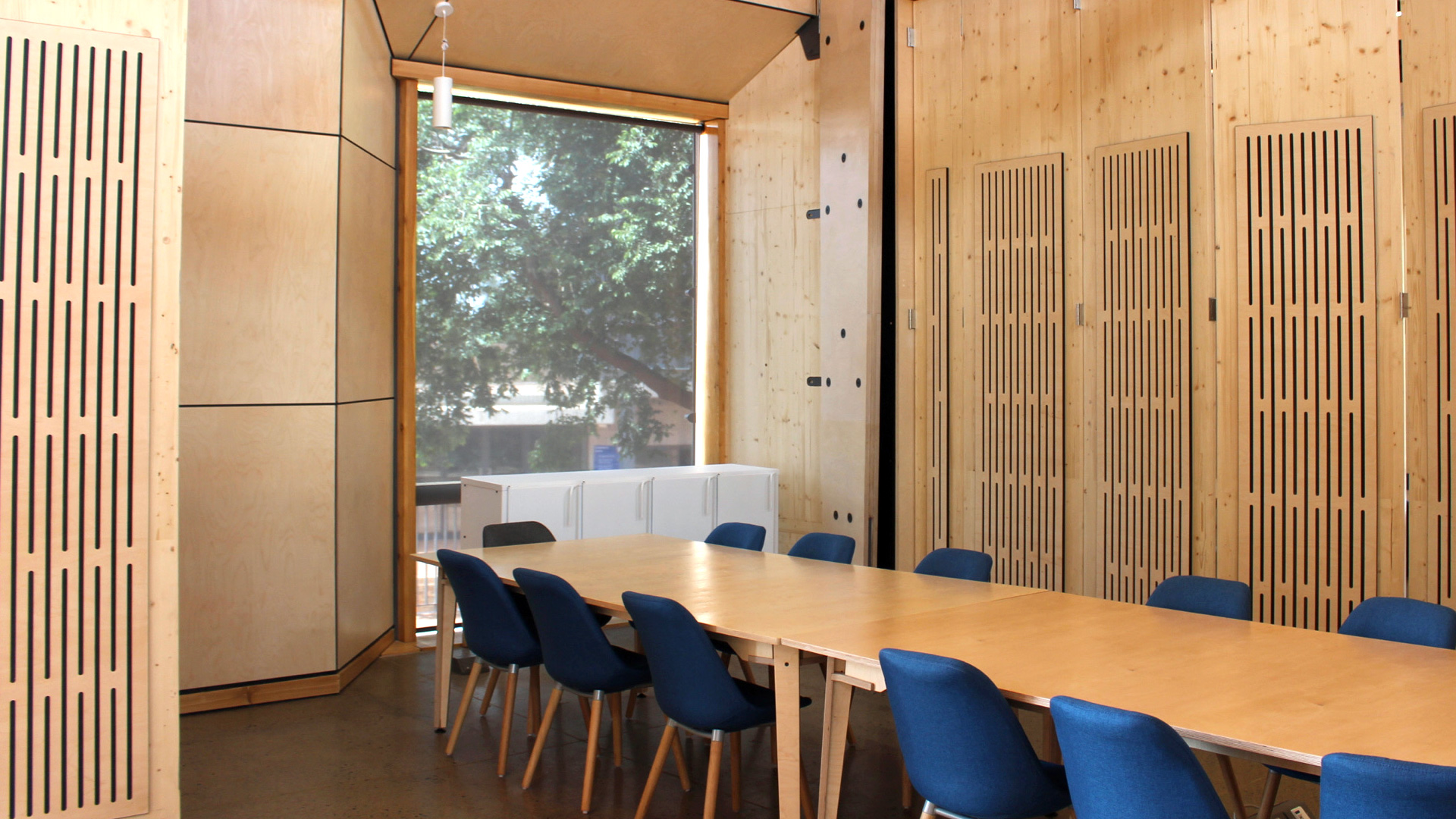 Anderson, whose company has worked closely with UPM for well over seven years, knows plywood inside out: "It has so many applications for concrete forms, structural boards, truck floors and furniture. Fortunately UPM's WISA plywood range has a furniture grade that we distribute - WISA-Birch Special. This grade was used all over the campus, especially where visual aesthetics were required, not only the structural element that birch plywood offers as well."

Despite Universal Plywood's extensive experience, the campus was an inspiring surprise.

"This was a pioneering project because in South Africa we mostly build with bricks and mortar and steel, we don't have major timber roof sections or frames," said Brad. "Architects do tend to be visionaries, but André Eksteen created a model for the future of the whole country. He approached everything in a new way. Usually the architect hands over to a big building company, but André was involved personally from procurement to pricing, negotiating on behalf of all the sub-contractors so everybody bought plywood at the same price. It was about bringing on small businesses rather than giving it to one large corporate."

For the first time in its history, Universal Plywood appointed a team member to work full time on the project, which Brad says worked extremely well: "It became a massive collaboration between bigger and smaller contractors. This way of working is a model we would like to repeat because you can forecast your requirements in the right timeframe. We import WISA products from Finland which takes 90 days and it went very smoothly because we were involved all the way through each stage. "People helped each other, working together which was amazing – that just doesn't happen on some projects. The architect was instrumental in driving that, in pricing and programming, and we all got paid on time! Plus this is a sustainable model with a clear chain of custody."

Brad Anderson was also impressed by the aesthetics of the campus buildings. "People who see them are in absolute awe. We haven't seen anything of that magnitude here before."

His enthusiasm for using plywood in more building projects across South Africa covers the massive scale of the potential market, the environmental and human advantages, but also the minutiae.

"The use of CNC machinery ensured everything fitted together. The tolerances were NIL – 0 mm! You don't get that accuracy building with steel," said Anderson. "André and BIM Manager Arné Gunter developed a 'puzzle' which had to fit together. Allowing for zero tolerance the feat of assembling such a complex structure on site was made possible by computerised cutting, laminating and bolting. By mobilising digital technology and parametric design, the cutting of the puzzle pieces could be outsourced to small factories and hand-assembled, on site where possible. 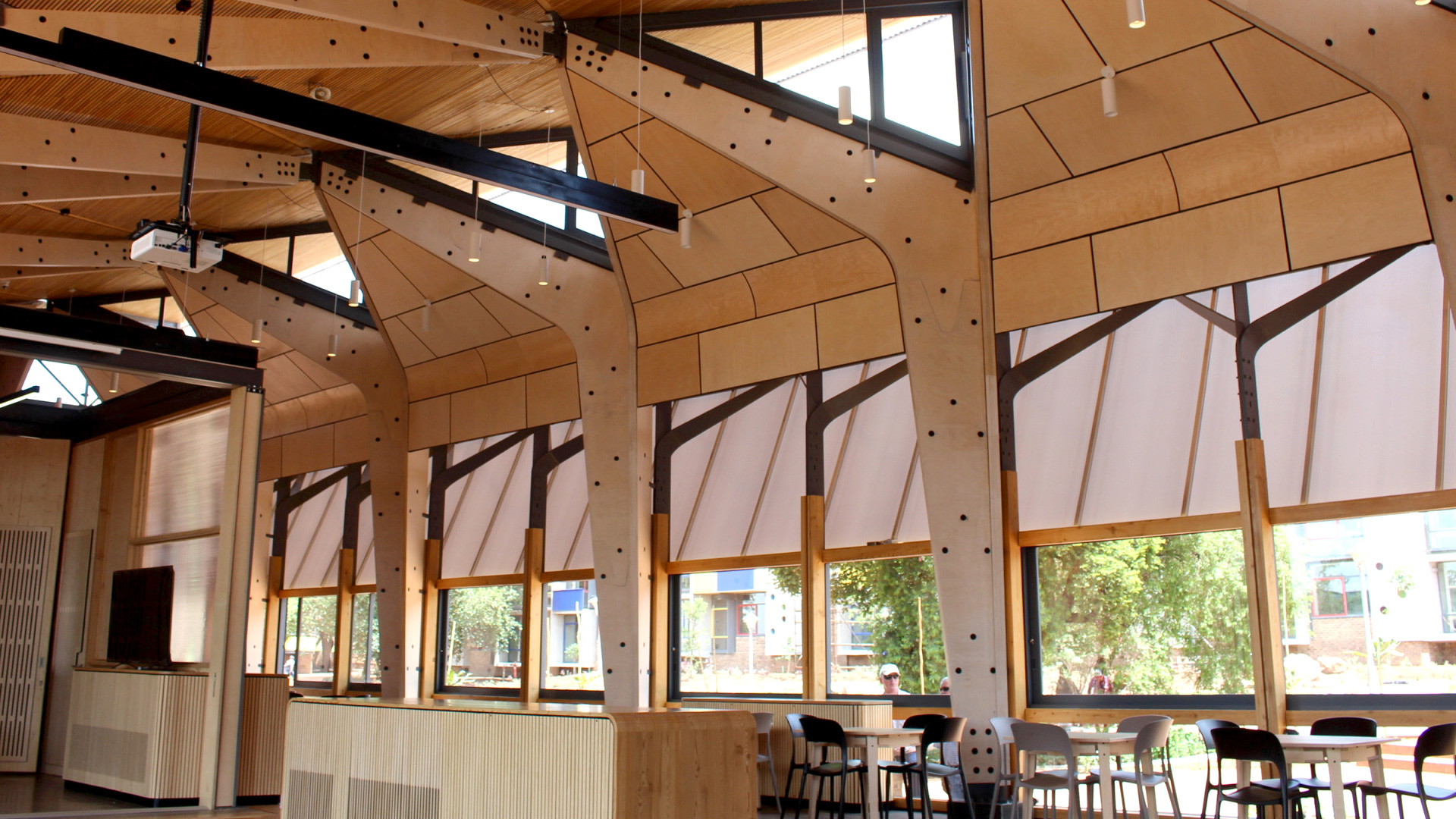 "We handled the computerised cutting and laminating. The portal frame in the dining hall and massive beams in the conference centre both support a really heavy roof. Everything is pre-cut and assembled on site incredibly quickly, which surprised even the builders. And we didn't need huge teams of people or specialists, we had a few general workers with a team leader assembling." 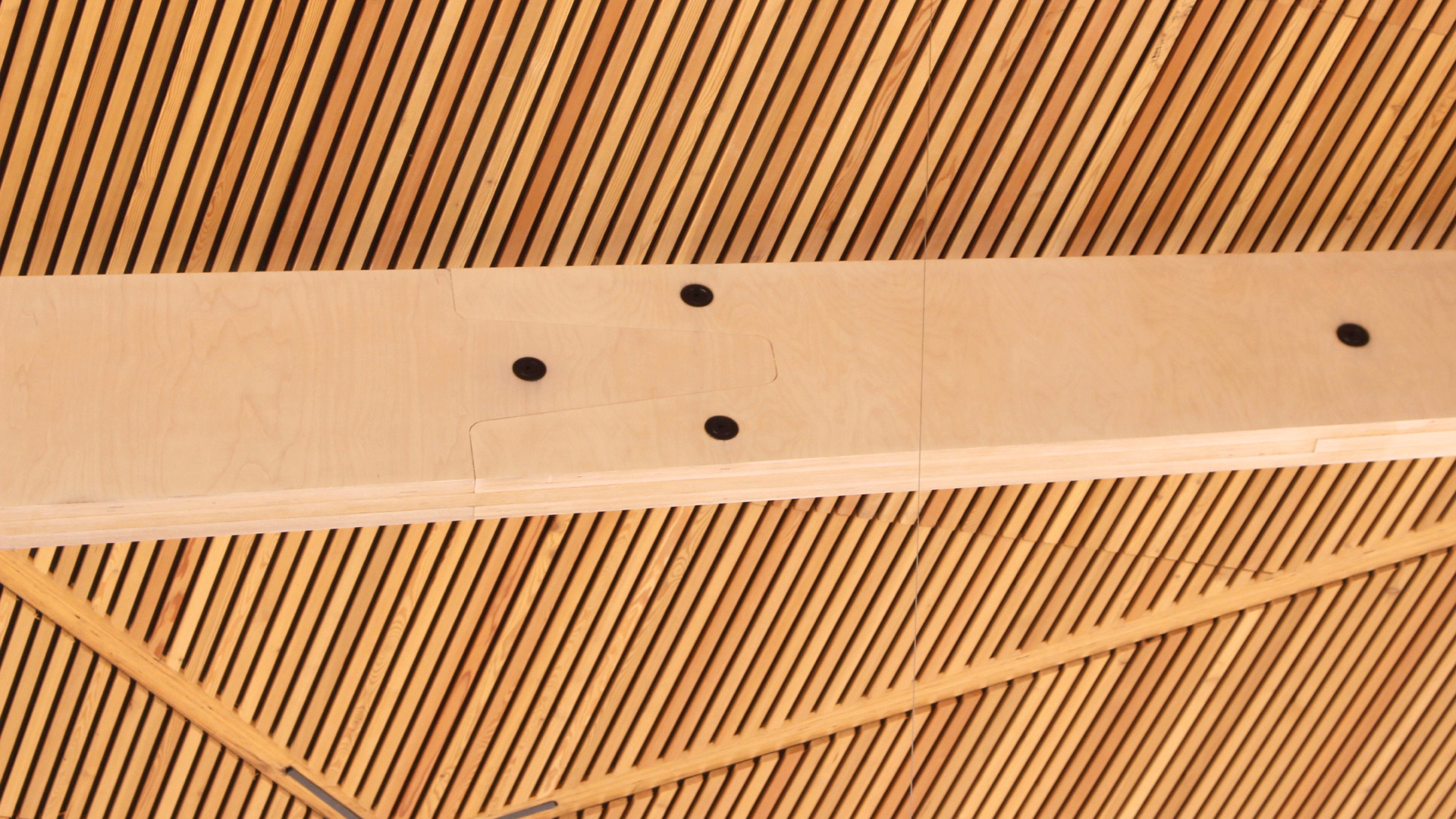 Pieces that fit together perfectly

Brad has his own vision for the future for plywood and building in South Africa. This features awards for André Eksteen's design, huge attention for how the campus was built, and a re-found love of wood for construction.

"We could have 'plyscrapers', multi storey buildings made out of wood. The first step will be pre-assembled buildings," he suggests. "As a company we want to look for solutions, to bring more wood into building projects in a country built on bricks and steel. But there's so much that can be done, and it's a healthy way to build with the right kind of footprint, replacing steel with wood.

"To sit inside a building like this is quite overpowering. It really brings back to you where we started – building with timber. Everything around you is 100% sustainable, built with organic material and not cutting down a rainforest. This is definitely the way to go."